Here is an article that appeared on the National Geographic Website after last years event. Enjoy ! 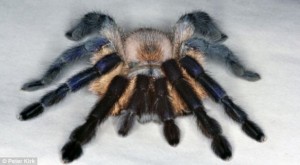 This is the big one, the prestige event, the oldest and best-attended show of its kind anywhere in the world. A trophy here can make a breeder’s reputation.

As ever, the judges were looking for perfection: a glistening coat, an alert, active demeanor, correct proportions, coloring, and conformity to type. Stance is important too. The legs—all eight of them—should be upright and perfectly poised. That’s right. You heard correctly. All eight.

Welcome to the 29th Annual Exhibition of the British Tarantula Society, the Crufts of the spider world, held on May 18 in Coventry, in England’s West Midlands, and attended by more than 30,000 tarantulas and their enthusiastic keepers.

The winner of this year’s Best in Show was a Socotra Island Blue Baboon spider owned by Mike Dawkins, a relative newcomer to the tarantula-keeping community who had entered the competition for the first time.

“It was my first entry,” said a delighted Dawkins, who started keeping tarantulas in 2011 and has already built up a menagerie of about 60. “I was very surprised to win Best African Species, let alone the Best in Show. That really shocked me.”

What makes a prize-winning tarantula? “A freshly molted adult offers the best opportunity for winning, as the colours tend to be brighter and more prominent,” said Pete Lacey, a breeder who won Best New World Arboreal and Best Old World Arboreal at this year’s show.

“The abdomen shouldn’t show signs of overfeeding but be lean and rounded,” Lacey added. A full head of hair helps too.

Lacey took Best in Show in 2010 with his Bahia Scarlet Bird-Eater and again in 2013 with his Brazilian White Knee. “Winning doesn’t make your spider more valuable,” said Lacey, who has entered the show every year since 2008. “The value is in kudos, respect, and pleasure in showing off a certain species in its prime.”

“When we judge a tarantula, we’re judging its keeper as well,” said Ray Hale, a veteran judge at the show.This year’s winning entry stood out for its vibrant good health, with a few added points thrown in for rarity—there aren’t ever many Socotra Island Blue Baboons in the running.

“You just looked at it and knew this was the one,” Hale said.Hale has been a judge since 2005 and a British Tarantula Society member for more than 20 years. This all started out as a bit of fun, he said. “But people take their tarantulas seriously, and we soon realized we had a genuinely competitive show on our hands—in its own way quite a bit like Crufts. We’ve had people come from all around the continent and as far away as America and Hong Kong.”

A Way of Life

The show has long outgrown its village hall roots and these days is held in a convention center. “I’m not sure what the booking people thought when we hired this place,” Hale said, laughing. “When they heard it was for the British Tarantula Society, I think they were expecting maybe a couple dozen people might show up. Instead we had queues stretching out the door.” 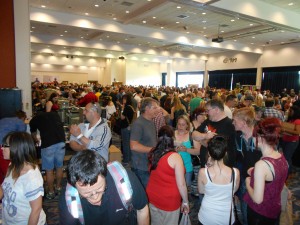 They weren’t just society members (who range in age from 4 to 86) but a large and curious public—something Hale and his fellow tarantula lovers are keen to promote.

“We particularly like to see kids get interested in them,” said Hale, who acquired his first tarantula when he was in his early teens and has been keeping them as pets ever since.

“You just never know where these sorts of interests can lead. We had one very keen boy who became a member when he was 14, came to all the lectures, and took lots of notes. Today he’s head of natural history at the Berlin Museum.”

Theraphosidae—the Latin name for the tarantula family—are a way of life for Hale. Now 52 and retired from his job as a health and safety officer in the construction industry, he and his artist wife, Angela (also an enthusiast), spend much of their year researching, writing, and lecturing in schools and on cruise ships. They often travel to Malaysia and Borneo to photograph tarantulas in the wild.

The Hales keep 150 tarantulas, representing 30 different species, at their home on the Sussex coast. The spiders live in separate glass tanks in a room that doubles as Ray’s office and research library.

“There’s a perception that people who keep tarantulas as pets must be a bit odd,” he said, “but really, if you looked through the ranks of our members, you’d see we’re all pretty normal.”

Nor are tarantulas just a “guy thing,” Hale added. Far from it. The split between the sexes in the tarantula-keeping community is fairly even, with young women in particular increasingly buying them as pets.

The Ideal Pet? You Decide…

“Tarantulas really do make an ideal pet,” Hale emphasized. “They’re easy to keep, they don’t smell, they carry no diseases that are communicable to man, and they can live up to 30 years.”

They don’t require much space either, being quite content to live within the confines of a modest aquarium. “In the wild, they stick very close to their burrows and seldom stray,” Hale said. “An aquarium for them is just about the right size. This myth of tarantulas creeping through the jungles is just that, a myth.” 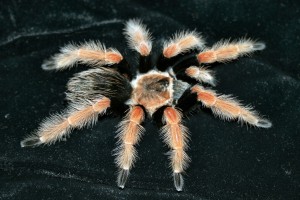 They come in a rainbow of colors too—red, blue, green, brown, black, spotted, striped, and multicolored. The Socotra Island Blue Baboon spider has tawny hairs on its body and iridescent, blue legs. The Chilean Rose, on the other hand, the most commonly kept pet tarantula, is brownish but with a scattering of the distinctive pale pink hairs that give it its name.

Pete Lacey’s personal favorite is Poecilotheria metallica, a spectacularly iridescent blue tree-dwelling species from India. But he’s also partial to the Green Bottle Blue tarantula—a New World species from Venezuela that as it matures changes colors and patterns from a tiger-striped spiderling to an orange adult, with an aquamarine carapace and blue legs.

Comely and exotic though they may be, tarantulas are no playthings. With larger species having fangs up to three-quarters of an inch long, their bite can be painful and unpleasant, although their venom isn’t lethal to humans.

One tarantula defense mechanism is to flick its barbed body hairs, or bristles, at a potential attacker—something that can happen if the spiders are handled or interfered with too much.

They’re also quite fragile: Drop a tarantula, and it can easily die of its injuries. “That’s why we as a club discourage handling tarantulas,” Hale said. In fact, anyone seen handling a tarantula at the show is disqualified and asked to leave.

Tarantulas, Hale concluded reverently, are to be looked at and admired and appreciated for the marvels they are.

“As a child I had a phobia about spiders, and then one day, just as in the nursery rhyme, I looked up and saw a spider that had dropped down beside me. Looking at it, I realized that it was beautiful. Its colors, markings, and the way it moved fascinated me, and that was it. I was hooked. Forty years later I still am.” 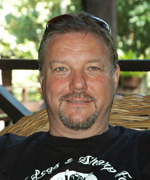